What We Like: All-around Ability in a Variety of Terrain

What We Don’t: Weight of Some of the Build Options


Santa Cruz has created the perfect one quiver bike with the Hightower. With a suspension system that is capable of handling flowy trails to absolutely nightmarish choss piles, the Hightower will make it through. Every tester has been really impressed and surprised by the Hightower and its overall versatility. There really isn’t much more to say other than this bike will climb and mountain and ford any stream. It was easy to give the Hightower our selection as Best All-Around Long Travel Bike of 2021. All-around Ability in a Variety of Terrain

Weight of Some of the Build Options Could Use Some Better Brakes 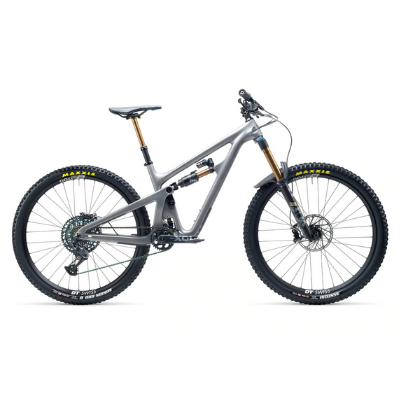 DH Bike That Can Climb Stock Shock Not Being Fox Float Not As Playful As Older Versions Made For The Downhills Climbing Could Be More Efficient

Santa Cruz has been a staple in the mountain bike world for years, and as a larger company, they have the freedom and capability to diversify their biking lineup. The Hightower is a great example of that. Smack right in between the Megatower (downhiller) and the Tallboy (short traveler), it is a super versatile “Goldilocks” of a bike. Made to be a trail/all-mountain bike, the Hightower combines good climbing with confident downhilling for a definite one quiver bike, and that’s why it has been named our Best All-Around Long Travel Bike of 2021. With a flip-chip, the bike can transform slightly, depending on your local trails and your riding style. In the low setting, you get a more linear progression rate in the shock as well as a slacker head angle, by 0.3-degree, and a lower bottom bracket clearance. So, it’s not a massive difference, but it can help make the bike more accessible on a variety of trails. The flip-chip does not make it feel like a different bike, which is something that happens with other flip-chips.
There is added protection throughout the bike, including a tailgate protector, a fender for the shock, and a really quiet chainstay protector. The internal cable routing is dialed and has little to no rattle, so the bike really could double as a stealth plane if the government wants to diversify. Though the aluminum bikes do weigh in on the higher end of the scale, at around 35lbs, the weight does not seem to impact the pedaling efficiency. Obviously, with carbon frames, things are lighter and slightly snappier, but the geometry remains the same throughout and allows for the climbing to be really efficient across the line. The 76.5-degree seat tube angle is steep and keeps the rider in a comfortable all-day riding kind of position. While the 65.2-degree head tube angle is steep, it doesn’t try to get away from you on the steep sections.


There is a lockout switch on the shock to assist in any long fire road climbs but a lot of testers opted to keep it open during technical climbs to help with small bump sensitivity and to keep all the traction they could in the back wheel. The Maxxis Minion DHR II tires are used across the line of bikes and are a great choice. They provide excellent traction, aren’t too heavy, and are ready to go out of the box. Sure, the Santa Cruz Tallboy is a better climber, but you get some more suspension in the Hightower, which will equal more capability and options for trails—never a bad thing. Talk about composure, like Will Ferrel in Old School, this bike does not lose its composure! With the 150mm of travel in the fork and 145mm of rear travel, there isn’t much this bike isn’t comfortable riding over—or through. Something you hear a lot from testers is that the Hightower can “punch above its weight class.” It even has the modern geo to help get you out of trouble when you pick a really spicy line.
The rear suspension is set up on Santa Cruz’s VPP platform, using the lower-link mounted shock, the platform is ready for more aggressive terrain. This is the setup they use for more aggressive downhill bikes, so the Hightower is good to go. With a shorter chainstay, the rear end is lively, and the bike is comfortable planted on the ground or flying through the air. 
As mentioned earlier, Santa Cruz’ scale makes the company able to produce a lot of bikes and a lot of build options, which is also awesome for getting bikes into a lot of people’s hands, no matter the price range. The Hightower Santa Cruz uses three frame materials: aluminum, Carbon C, and Carbon CC. As we know the more C’s after the word carbon, the lighter and firmer the carbon—oh, and the more expensive.

There are three aluminum build options: the S, $4,299—which comes with SRAM components and as a highlight the Code R brakes; the model R, $3,499—which is set up with SRAM NX Eagle drivetrain; and finally, the model D, $2,999—which is the entry-level build option but still comes with a RockShox 35 Gold fork and the Fox Float Performance DPS shock.


There are two frame-only options: the aluminum frame, $1,999, and the Carbon CC frame, $3,999. With this number of frames and the components that Santa Cruz has kitted the bikes out with, there is a suitable bike for every price range. The Santa Cruz Hightower is like the wands in Harry Potter—everyone will find a bike that fits them and is ready to make magic. A well set up VPP suspension has created a pedaling platform that is easy to manage and works well. On the downhills, the Hightower is ready for any line—be it flowy or absolute chaos. This is why it earned our nod as the Best All-Around Long Travel Bike of 2021.

This is a very versatile bike that a lot of riders will enjoy across a variety of terrains. We were really impressed with the bike and its capabilities. If you do more pedaling and less bashing, then there is the Tallboy. However, the Tallboy just isn’t as capable over a variety of terrain as the Hightower, and that is where the big difference is. Whether you pedal to the top of your local hills or take a lift, the Santa Cruz Hightower is ready.